Is Your Drinking Water Working Against Your Yoga Practice

Many people know that our bodies are mostly water, with up to 99% of our cellular molecular composition made of water as reported by water researchers such as Professor Gerald Pollack. So, why are we so dismissive of the principles and benefits? It has been the same as our appreciation of yoga, which has experienced a resurgence. Often it’s the most simple things that get overlooked, and it is often those which we must begin to remember.

Water has been cherished by ancient civilisations, and is recognised for its divine nourishment by Ayurvedic practices. It is known as the principle of cohesion, with the ancient practice of yoga calling for a rolling fluidity of movement that many yogis’s will know well as they move gently, but with strength, in a way that mimics water in its natural form.

Yoga is hugely beneficial for stress reduction and increased fitness, strength, and muscle tone – but modern yogis often leave out the Six Cleansing Kriyas, which frequently use water as well to cleanse and purify the internal body. Water can be found everywhere in yoga, and everything from chakra alignment to muscle tissue needs water absorption to enable its processes – but can the type of water you’re drinking make a difference? 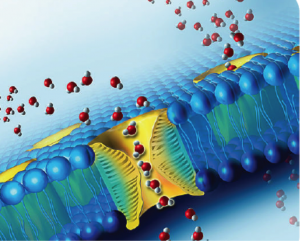 Yoga and water are deeply entwined with one another, especially with the popularity of Bikram yoga requiring particular attention to hot yoga hydration. Here, it is easiest to see that regular water is insufficient at rehydrating, due to the molecular structure being too large to pass through the aquaporins. Theses aquaporins are large enough for a single molecule of water to pass through, however, water that has been processed unnaturally and taken from its usual fluid form tends to form molecular clumps which cannot be absorbed effectively or efficiently.

The constant movement of waterfalls, streams, and natural flow allows the water molecule clusters to remain separate while moving as one. However, when the water becomes artificially congested, polluted, and restricted, the molecules bind together – becoming difficult for our body to absorb, and resulting in bloating or mild dehydration.

Structured water has been oxygenated through a water vortex, which results in the water returning to its natural form, free from toxins. This breakthrough in human scientific understanding has given us a new awareness of how our body performs and challenges our perception of how our body interacts with nature. In all exercise, hydration is important. But, in yoga, there is an innate understanding of the properties of water as much as of the benefits – and in both these cases, structured water can provide everything that we need.

If you’re interested in Structured Water becoming a part of your life, look online at our information and testimonials, or at our online store.